Tell Cambridge about your experience of H Gee...

H Gee is in Mill Road Cambridge. You can view a list of neighbouring businesses by going to the Mill Road page.

More places in or near Mill Road... 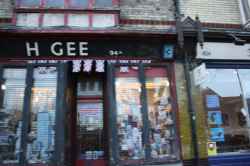 H Gee on a Map

Note: the pin is positioned at the postcode centre, and may not correspond with the precise location of 94A Mill Road.